Delve into ancient Greek mythology on the slot from Fantasma Games powered by Relax Gaming. Maze Escape Megaways will see you join Daedalus and Ikarus in their quest to defeat the Minotaur for their getaway on six dynamic reels with Shifting Maze Avalanches, three modifiers and a free spins round that can lead to wins of up to 25,000 times your bet.

Maze Escape Megaways is a shifting video slot with six reels, two to seven rows and 64 to 117,649 ways to win. Pays are awarded for three to six matching symbols on adjacent reels from left to right only. You can delve into Greek mythology on desktop, tablet or mobile from 0.20 to 40 credits per spin. The game has high volatility (4/5) with an RTP of 96.15% and a hit rate of roughly 1:4.5 spins.

The storyline is taking you deep into Greek mythology, evolving around the King of Crete called Minos who turns against the Gods and creates a monster which is today known as the Minotaur. To hide his sin he calls on Daedalus to build an endless maze to make sure the creature cannot escape. Daedalus goes to work together with his son Ikarus and once completed, the evil king throws them as well into the maze to forever keep their silence. They immediately start to plan their escape from the maze, taking on a suspenseful reel journey across six dynamic reels, all to a heroic orchestra piece.

The pay symbols start at the low end with three coins marked with Greek alphabet characters – Lambda, Theta and Omega – as well as battle axes, golden wrath and warrior helmet, awarding 0.75x to 1.5x your bet for a single six of a kind. They are followed by King Minos, Daedalus and his son Ikarus. Hit six across the reels to win 2x to 3x your stake. There is no wild symbol as such but Minotaur Multiplier Wilds can be activated during one of the features. A golden coin acts as the scatter.

Fantasma Games is always good for a surprise with regards to their slot creations. Especially those using the Megaways engine have been out of the ordinary, to say the least. Fortune Flowers Megaways and Medallion Megaways are just two examples of their out of the box approach. Well, time to take a closer look as to what they included on Maze Escape Megaways. 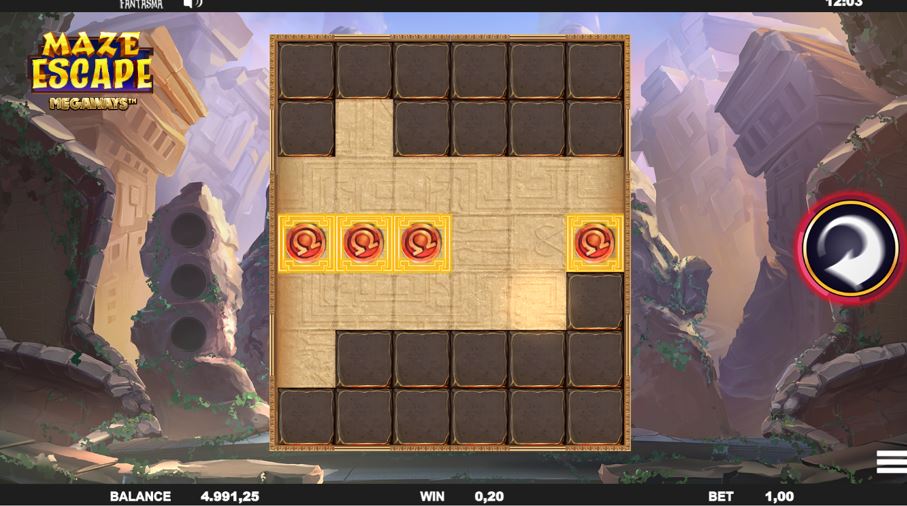 At the core of the gameplay is a combination of the Megaways engine with a moving reel mechanic called Shifting Maze Avalanche. At the start of a spin sequence, the game engine randomly drops two to seven symbols onto each reel and covering the remaining positions with Blocker symbols. This gives you an initial 64 to 117,549 ways to win. Scoring a standard win will be paid as usual and the next spin starts.

However, keep an eye on the gold-framed middle position on reel one as landing a win with a winning symbol in the frame will turn it and all matching symbols into Path symbols for the current round and trigger the Shifting Maze Avalanche feature. After the win evaluation, all Path symbols are moved to the centre row and locked into place together with any Minotaur Wilds and Blocker symbols in view. The reels will now shift one step to the left moving the symbols on the first reel out of view and adding a new reel with a random number of symbols to the right. Landing another winner with Path symbols will repeat the process until no new wins occur. A couple of modifiers will assist you in your maze escape and potentially keep a spin sequence going or improve your win. At the start of a new round, up to six Blocker symbols can appear on the covered positions of each reel. They cannot be part of any winning combo but will come into play via the Shifting Maze Avalanche feature to trigger a modifier. Two random Blocker symbols will be unlocked after each shift of the reels. Some will be marked with a helmet, a Minotaur or golden wings and unlocking one or more will trigger the respective modifier.

There is no limit to a spin sequence. It will continue the Shifting Maze Avalanche as long as a win with Path symbols occurs after shift, indefinitely moving reel one out of the game area and adding a new reel on the right. All wins are accumulated and paid once it concludes. Keep an eye on the coin collector to the side of the game window. Every scatter landing throughout a spin sequence will be added to the meter. Collecting three by the time a game round ends will trigger 10 Labyrinth Free Spins with an x1 starting win multiplier. During the feature, the entire reel one is gold-framed and scoring any win will trigger the Shifting Maze Avalanche feature. If you have two winning combinations with different symbols, than one is randomly chosen to become the Path symbol. Labyrinth Blockers can appear on reels three to six and unlocking one will either increase the win multiplier by x1, x2 or x3 or award +1, +2 or +3 free spins, no limits. The bonus feature ends when you run out of free spins.

Phew! That was quite something. Never a stranger for new game mechanics, Fantasma Games has outdone themselves again on Maze Escape Megaways. While it all looks convoluted and complex at the beginning, the gameplay will become clear pretty quickly after a few spins and once you have seen each modifier has triggered at least once. In some way, it reminds me of Temple Tumble Megaways from Relax Gaming although the shifting reels is something completely new.