Napoleon: Rise of an Empire

Did you know that Napoleon Bonaparte became a general at the age of 24? Considered to have been one of the greatest commanders in history, he won most of his battles by employing new war tactics that took his adversaries by surprise. His legacy is still present today as he introduced legal and educational systems, build road networks and overhauled agricultural methods.

Blueprint is now immortalizing Napoleon on a video slot in their Colossal Payouts series. And just like him, it is a highly volatile game. Although not as feature rich as other slots from this developers, it has plenty to offer with two random features and a free spins round with wild multipliers and the Napoleon Streak that can lead to wins of up to 10,000 times your stake.

Napoleon: Rise of an Empire is a video slot with five reels, three rows and 20 fixe pay lines. You can join the reel battle on desktop or mobile from 0.20 to 100 credits. The RTP of this extremely volatile game is set at 95.96%. Use the usual Autoplay controls to set up 10 to 100 consecutive spins with a mandatory loss limit when the run should stop.

As expected, the slot is set in the midst of a battlefield with cannons firing, infantry regiments marching and the cavalry charging. Cannons, horses, battleships and infantry soldiers also feature prominently on the reels. Wavering fog and an eerie soundtrack add to the haunting feeling that a fresh attack is imminent. 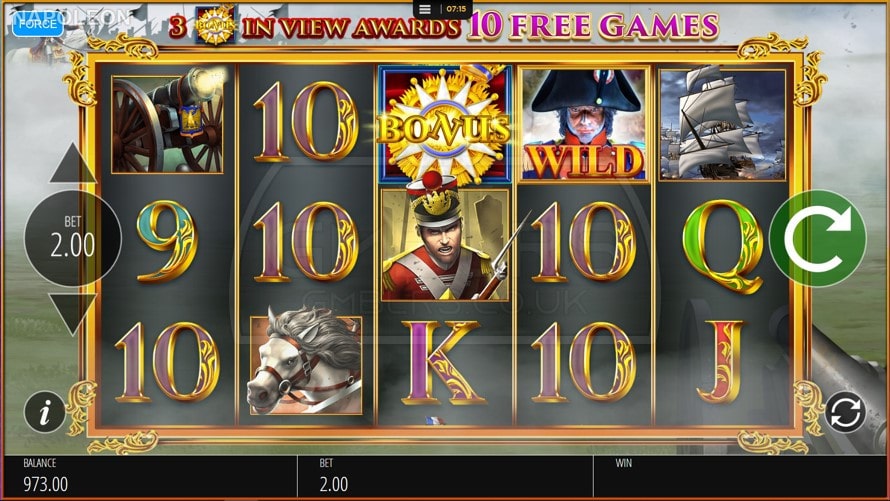 Open the game to find the usual card royals from 9 to A at the low end, followed by cannons, horses, battleships and a soldier at the high level. Pays for a five of a kind range from 4x to 200x your stake. That pales though in comparison to the Napoleon symbol, which paying a massive 5,000x your bet for five on a line.

Napoleon also acts at the same time as the wild symbol, substituting for all other symbols bar the scatter. And there is even more. It will multiply wins in the base game and free spins by x2, x4, x8 and x16 when one, two, three or four appear in a winning combination. Last but not least, scatters are a golden military medal with the word ‘bonus’ across it.

Watch out for an animated Napoleon randomly appearing in a mega size on the centre reels. He will let out his famous battle cry ‘attaque’ to add a random number of bonus or wild symbols to the current spin. This raises the potential to score a big win or trigger the free spins round.

Bonus symbols anywhere on reels two, three and four will trigger 10 free spins, which can be indefinitely retriggered. During the feature, any winning combo in view will lock in place and activate the Napoleon Streak. The reels respin and will continue until no more winning symbols appear in view on a respin. The wild multiplier is also in play during the feature. The evaluation is made after the streak concluded.

Fancy a hair-raising rollercoaster ride? Then Napoleon: Rise of an Empire is just the right slot for you. It can diminish balances without as much as blinking with an eye but can also lead to super mega wins on any spin in the base game and free spins. No mercy, just like Napoleon Bonaparte himself.

Remember, you can play Napoleon: Rise of an Empire here

Name Napoleon: Rise of an Empire