Watch Professor Taylor and his nephew Benjamin on the slot from Elk Studios as they stumble across an ancient drawing which seems to unravel the mystery of The Great Pyramids, showing a secret passage leading to the treasure room with precious gold stones. The adventurers immediately jump on a bumpy flight, taking them to Cairo to resume the search for the golden stones, worth up to a whopping 215,000 coins on a single spin.

The game comes with massive falling blocks instead of spinning reels, featuring a thrilling mix of re-spins, free spins, sticky wilds, expanding symbols and cascading win lines. All is presented in a colourful Egyptian setting with a catchy oriental soundtrack, combined on 5 reels, 4 rows, and 178 fixed pay lines.

TRTP for this high variance slot is stated at 96.30% with the top win in a single spin peaking at 215,000 coins or 2,150x stake. Bet sizes range from $0.20 – $100. Players can employ different betting strategies in addition to the standard Autospin feature with up to 100 consecutive spins. Options are: Optimizer – Bet a % of the balance; Leveller – Raise on 5 concurrent losses; Booster – Raise on loss; Jumper – Raise on a win. The slot is fully mobile optimized but plays just as smooth on desktop or tablet across all OS platforms.

The slot is visually a feast for the eyes. The entrance to the Great Pyramid guarded by to Anubis gods is the backdrop to a completely frameless game window. The symbol tiles are resembling old stones with hieroglyphs while they tumble down from the top instead of normal spinning reels. A catchy Egyptian tune completes a beautifully designed game. 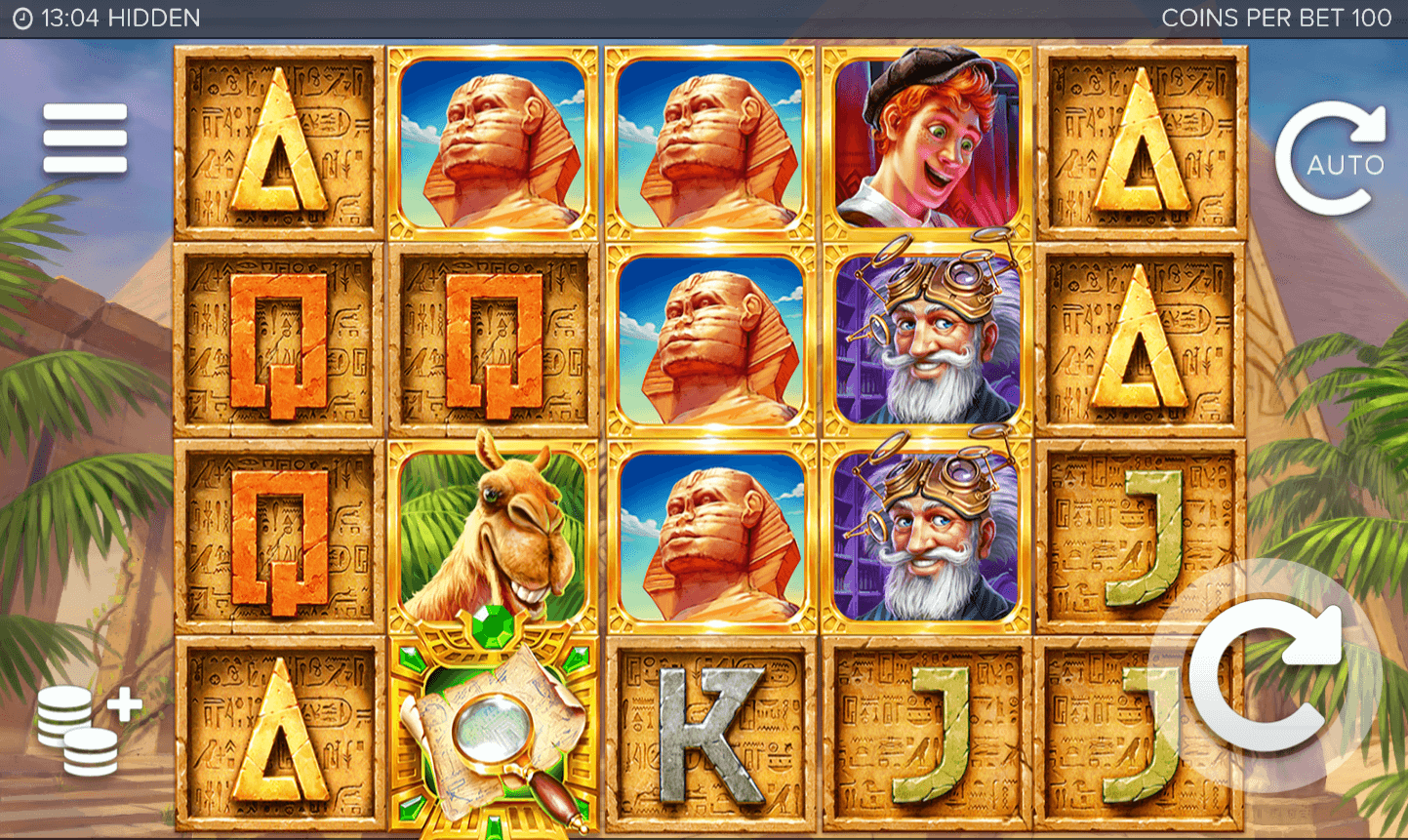 The artwork on the pay symbols is absolutely amazing on any Elk Studios slot and on HIDDEN taking it even a notch further up. Low-value symbols are the usual 10 – A set, continuing on the high level with a laughing camel, a pyramid statue, Benjamin and Professor Taylor. The wild symbol is an intricate tile with red gems on each corner and the word WILD across it. Scatters are a magnifying glass with minimum three needed on the middle reels to trigger the bonus game.

As with all their slots, Elk Studios has given HIDDEN as well a range of bonus features that will keep players on their toes when they are triggered. Get started with a random re-spin feature. Watch the sky and clouds come to life, going back in time to ancient Egypt to get a glimpse of what the pyramids once looked like. Three Flashback Re-Spins are awarded on each occasion with the winning potential boosted by one, two or three of the middle reels completely covered by sticky Wild symbols.

Land three magnifying glasses anywhere on the reels in one spin to trigger the Treasure Room Free Spins. One of the pay symbols present on screen is randomly selected as the expanding symbol for the bonus game. This symbol will expand clockwise when it lands once for every Free Spin to a 2×2 size, creating big blocks of identical symbols. Non-expanding symbols are cleared away after the initial spin to give room for a second symbol drop and potential new winning combinations. The bonus game starts off with 5 free spins, with every additional magnifying glass adding one extra free spin.

Every spin has the potential to generate considerable wins due to the sequential payouts. If a high-value symbol is chosen, it increases the chances of hitting really big in the Treasure Room. Maximum win on a single spin is 2,150x bet for a full screen of Professor Taylor symbols.

Did we get into our explorer gear after spinning the reels on HIDDEN, ready for the next treasure hunt? Indeed, we did as this is a superb slot from the creative Elk Studios with thrilling features, spectacular graphics and animations, all combined into a high volatility game with big win potential and accompanied by a soundtrack that will have everyone tip-toeing through their gaming session. A must try!

Remember, you can play HIDDEN here