Get drawn into a dark tale of love and intrigue on the cult slot from Microgaming. Just over a year after releasing with Thunderstruck II their first blockbuster slot with the new 243-ways engine, the studio rattled the online gaming world again in 2011 with a sinister vampire-themed slot. While Immortal Romance has similar features, it comes with a much more volatility setting, just as you would expect from vampires.

The four main characters – Amber, Sarah, Michael and Troy – are entangled in a web of intriguing reel mystery. Amber is a pharmacist that comes from a long line of witches and best friend of Sarah, a doctor in pathology who is in search of a cure to ageing. Sarah falls in love with Michael, an 800-old vampire hiding in the body of a genetics professor. They all pale in comparison to Troy, a vampire playboy and the darkest character of them all. Best friend of Michael, he haunts Sarah in the belief she’s hiding a dark secret that could turn out dangerous to vampires.

Sounds intriguing enough? It sure has enough fodder for a blockbuster movie, not just a thrilling slot game. The storyline is reaching its climax in four bonus rounds and a random Wild Desire feature that can lead to wins of up to 12,150 times your stake.

Update 21st May 2020: The timeless classic Immortal Romance was launched today with a revamped user interface and updated graphics. Gameplay, features, payouts and RTP were not affected.

Immortal Romance is a video slot with five reels, three rows and 243 ways to win. Pays are awarded for adjacent symbols from left to right only. Playable on desktop, mobile and tablet, it offers bet sizes from 0.30 to 6 credits per spin. Some casino operators such as 32RED offer bet sizes of up to 15 credits. The RTP of this medium variance game is set at 96.86%.

The entire slot design appears dark and sinister with a haunting, suspenseful soundtrack as well as gargoyles and angles watching your every move from the top of the game window. Yet again, the graphics have survived the ageing rather well and appear just as authentic after spending close to a decade in the casino lobbies. However, the stunning animations of the characters when you hit a five of a kind are made for eternity. The foursome obviously features prominently on the reels while the setting in the bonus round changes with the associated character. Dramatic crescendos in the soundtrack will keep you on the edge throughout your slotting sessions. 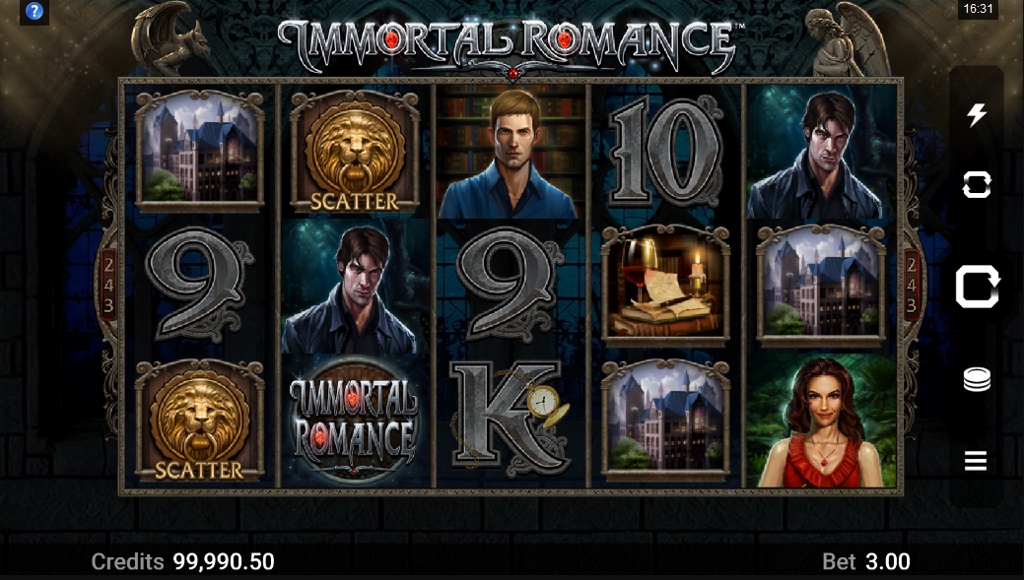 Microgaming went again with the card royals from 9 to A at the low end, paying 3.33x to 5x your bet as standard and 6.66x to 10x your stake when in combination with a wild. They are followed in ascending order by a book & candle set, a vampire mansion as well as the four characters – Amber, Troy, Michael and Sarah. Pays for a 5OAK increase to 8.33 to 16.66x your stake as default, which is again doubled to 16.66 to 33.33x the bet when a wild is part of the winning combo.

The Immortal Romance logo is the wild symbol, substituting for all regular pay symbols and doubling every win if part of the combo. Hitting five across the reels pays 50 times your stake. A lion head doorknob marked with the word ‘scatter’ is the bonus symbol. Two to five scatters will award coins wins from 1x to 200x your total bet.

Watch out as the top can turn suddenly into a sea of deep red blood which will announce the trigger of the random feature. The blood will drop onto randomly selected reels and turn them into a stacked wild. Contrary to Thunderstruck II, the feature does not start from the left, instead, it can pick any random reel at each step.

Wins are evaluated after the reels without an expanded wild have stopped. Getting a full screen of expanded wilds will pay the maximum win for Immortal Romance which stands at a staggering 12,150 times your total bet. The intriguing storyline will come to a climax in the Chamber of Spins bonus rounds. A total of four are on offer, each with its own characteristics. Amber’s round is available as default while the other three need to be sequentially unlocked by triggering the bonus rounds a defined number of times. You can pick any of the rounds once you had 15 bonus rounds. To trigger the free spins, you will need to hit three to five scatters anywhere on the screen in a spin. The game will lead you to the feature selector screen, displaying the four options.

It will be tough for anyone to find a more thrilling slot. Immortal Romance combines perfectly a storyline about vampires, love and intrigue with exhilarating high-volatility action on five reels that can lead to super mega wins in the base game and bonus features. The game has amassed a huge crowd of faithful followers who will play it at every opportunity. Personally, I still prefer TS2 over IR (the acronyms used for these two blockbuster slots) as it is slightly less volatile.