Join the quirky conquistador in his search for El Dorada on the slot from NetEnt. Gonzo’s Quest is a humorous take of the Spanish adventurers that would descend on the South American continent in the 15th and 16th century in their quest to find the proclaimed city of gold. The explorer’s name is associated with real-life Gonzalo Pizarro, who in turn was the brother of the famed Inca Empire conqueror Francisco Pizarro.

On its release in 2011, the game was considered somewhat revolutionary as NetEnt introduced the iconic Avalanche reel mechanic where symbols drop onto the reels instead of spinning on strips. Not only that but winning combos would explode to be replaced with new symbols that could potentially lead to multiple winners in a round. A progressive win multiplier in the base game and a Free Falls feature with increased multipliers were added to the gameplay that could see lucky reel conquistadors walking away with wins of up to 2,500 times their bet.

Gonzo’s Quest is a cascading video slot with five reels, three rows and 20 fixed pay lines. Wins are awarded for three to five matching symbols on a line from left to right only. Available on desktop or mobile, you can bet from 0.20 to 100 credits per spin. The game has medium variance with an RTP of 95.97%.

Loading the game will see Gonzo arriving off the coast of Peru to start his quest to find El Dorado. The game window is set in the midst of the jungle against walls of the ancient Inca temple that becomes visible every time new symbols avalanche onto the grid. Tribal masks dominate the reels while Gonzo stands on the left to cheer you on in your quest to enter the city of gold. 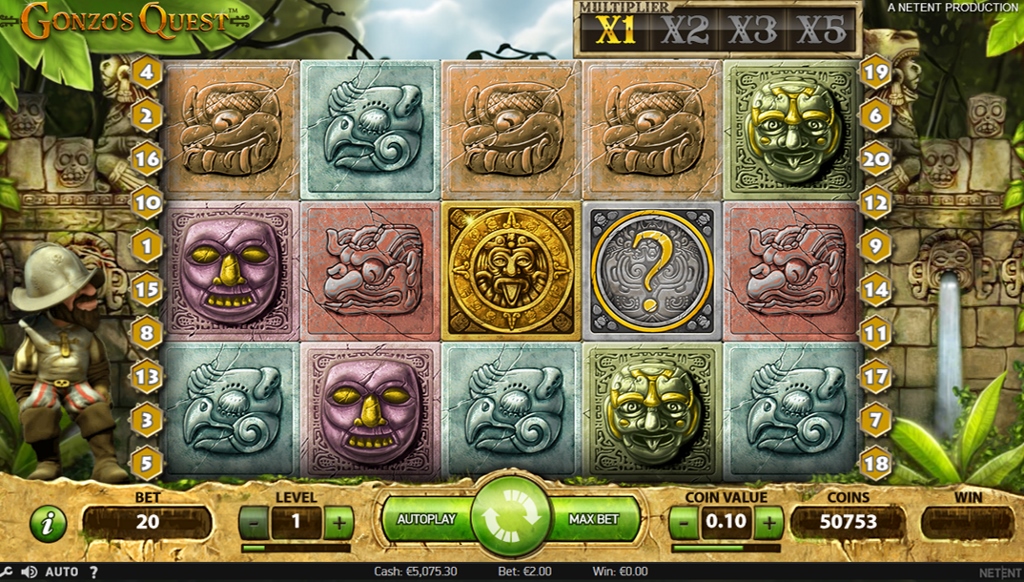 The pay symbols start at the low end with depictions of jungle creatures – birds, fish and snakes – awarding 2.5x to 5x your bet for a single five of a kind. They are followed by more elaborate masks in purple, yellow, green and grey colours. Gold ornaments distinct them from the low-value symbols. Hit five on a line to win 10x to 125x your stake.

A stone with tribal carvings marked with a question mark is the wild symbol, substituting for all pay symbols including the scatter which in turn is an intricate golden mask.

Little did the design team at NetEnt know at the time that they were about to create an immensely successful slot that would one day feature alongside Starburst and Dead or Alive as one of the most popular NetEnt game. Introducing a new reel or pay mechanic is always a risk as it could doom a game from the getgo or make it a massive winner. Luckily, in this case, the latter happened and Gonzo’s Quest has featured in the TOP10 of most played slot ever since its release in 2011.

The Avalanche reel mechanic is central to the gameplay in both the base game and free spins. At the start of a spin sequence, 15 symbol blocks will drop onto the grid to potentially form winning combinations. Any combo will see the respective stones shatter and disappear to make room for new symbols to avalanche into place. Score another winner and the process is repeated up to the moment were no new wins occur after an avalanche. At the same time, a win multiplier increases progressively with each winning avalanche from the default x1 to x2, x3 and ultimately to x5. The display in the top right corner will show the active multiplier. It will reset to the default once a spin sequence concludes.

Hit three or more scatters on a pay line starting from reel one to trigger the Free Falls feature. You will get 10 free spins for each pay line on which the scatters have landed. The feature can be retriggered and not to forget, wild symbols substitute for scatters as well, making it easier to enter the bonus round. The screen will split like an opening gate, letting you and Gonzo enter the city of gold. During the feature, the win multipliers are increased, starting at x3 and raising to x6, x9 and x15 after the first, second and third winning avalanche. It will reset to x3 at the end of a free spin sequence.

Although there are well in excess of 10,000 active video slots currently available online, there are only one or maybe two dozen that have achieved legendary status in the casino community. Gonzo’s Quest is one of them and rightly so. It offers medium-variance action with suspenseful gameplay and decent win potential of up to 2,500 times your bet.