Travel to Mexico for a hot reel fiesta on the slot from NetEnt. Willy’s Hot Chillies is after Spinata Grande the second creation bearing a Mexican theme, only that this time it will be for a friendly senor to set off the reel celebrations instead of colourful pinatas. The game comes with stacked multiplier wilds and Willy’s Hot Wheel bonus feature that can lead to wins of up to 2,500 times your bet.

Willy’s Hot Chillies is a video slot with five reels, three rows and 20 fixed pay lines. Wins are awarded for three to five matching symbols landing on a line from left to right only. You can join Willy’s fiesta on desktop or mobile from 0.20 to 400 credits per spin. The game has low to medium volatility with a default RTP of 96.00% and a hit rate of 20.79% (roughly 1:5 spins).

Visually, the slot won’t set off a firework that is usually part of any Mexican celebration. The scenery is your typical Mexico-cliché with cactuses flanking the reels while a desert scene with rock formations can be seen in the background.  Willy’s sombrero will become the centre of attention during the bonus game while the hot chillies spice up the gameplay as mutliplier wilds. A lively Mexican tune is the main audio, oddly intermittently interrupted by a dog’s bark. 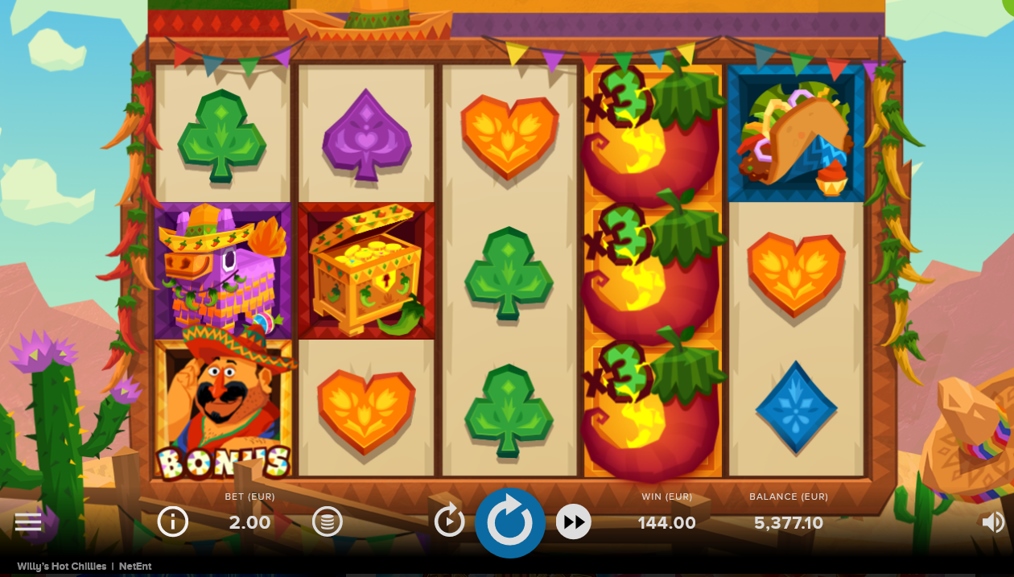 The pay symbols start at the low end with the card suits – blue diamonds, green clubs, purple spades and orange hearts – awarding across the board 0.5x your bet for a single five of a kind. They are followed by a taco, a chilli sauce bottle, a pinata and a treasure chest filled with gold coins. Hit five on a line to win 1x to 3x your stake. A hot chilli is the wild symbol, appearing on reels two to five with a random multiplier and substituting for all regular symbols. Senor Willy is the bonus scatter on reel one.

NetEnt first trip to Mexico wasn’t too big of a success although it had some interesting features such as up to 4×4 mega symbols. Time to return after a few years to give it another try. The result looks better and the main feature is an eyecatcher but the mediocre line pays, the overall lowish volatility and the at best medium win potentially might just spoil this reel fiesta. Core to hitting anything sizeable in the base game are the stacked multiplier wilds. They can land on reels two to five and each will be marked with individual multipliers from x2 to x5. More than one in a winning combo will be added, giving you a maximum x20 multiplier for the current spin. Hitting at the same time one of the premiums on reel one will pay a decent win. At most, it will be 1,200 times your stake should you indeed manage to have a full stack of treasure chests on reel one and all four reels at the back filled with x5 multipliers. No doubt, it won’t happen that easily or often. The reel fiesta will move up by a floor during the Willy’s Hot Wheel bonus game. To trigger it, you will need to land senor Willy on reel 1 and one or more fully stacked wild reels in the same spin. The wild reels turn into a Fire Pointer with the sum of its multipliers being awarded as the number of spins the respective pointer will stay active in the bonus game. For example, having x2, x3, x2 on the wilds will get you 8 spins.

Further boosting your wins in the bonus game is the Chillie Multiplier. It starts at x1 and increases by x1 every time a red chilli appears anywhere on the wheel, no limits. Any won coin prize is multiplied by the currently active Chilli Multiplier. The bonus game continues until the counters on the last active Fire Pointer reaches zero.

Well, that was some cheerful slotting. NetEnt got the atmosphere, peripherals and soundtrack right but Willy’s Hot Chillie lacks the high win potential. Realistically, 1,250x bet is the most we are probably ever going to see as the quoted max at 2,500x has a frequency of 1:84 billion spins (not a typo). However, it can deliver a few decent pays in the 50x to 100x range in quick succession as our second screenshot shows but anything higher will be an uphill battle. The bonus game is fun but the payouts are again at best medium-sized. Still, a humourous slot that will keep you spinning longer than intended on most occasions.