Become a member of the Dragon Tribe on the slot from NoLimit City. Join the fierce shieldmaiden and the five dragons in a fantasy-themed game that will take you on a high-volatility rollercoaster with cascading reels, xNudge Wilds, xWays Mystery Symbols and two Dragon Spins modes. The bravest spinners will be rewarded with wins of up to 27,000 times the stake.

Dragon Tribe is a cascading video slot with six reels, four rows and 4,096 ways to win in default mode. This can increase up to six rows and 20,736 ways during the gameplay. You can join the tribe on desktop or mobile from 0.20 to 100 credits per spin. The game has medium to high volatility with an RTP 96.07% depending on which free spins mode is selected. Some operators will offer the game with a lower setting at 94.41%. A quick peek into the help file will let you find out which version you will be playing.

A mountainous fantasy world with erupting flames is in the background of the stone encased game window. All pay symbols are held on stone blocks that will crush violently when they land in winning combinations. The reels itself are dominated by the shieldmaiden and the five cartoon-style dragons. An epic soundtrack is the main audio and only interrupted by the sound of crushing stones. 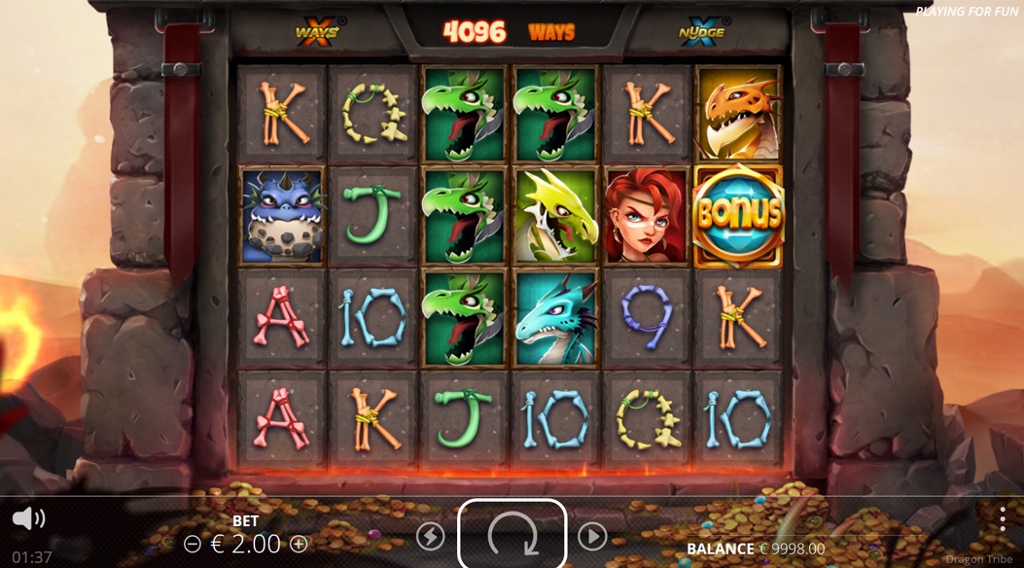 On the reels, you will find at the low end card royals from 9 through to A built from dragon bones, awarding 0.5x to 0.75x your bet for a single six of a kind. They are followed by purple, turquoise, mint, green and orange-coloured dragons as well as the shieldmaiden. Hit six across the reels to win 0.9x to 3.75x your stake.

A dragon egg is the xNudge Wild symbol, appearing on reels two to five only and substituting for all regular symbols. An X-icon is the xWays Mystery Symbol while a blue gem marked with “Bonus” acts as the scatter.

In the course of the past 12 months, NoLimit City emerged as a progressive game studio that does not simply churn out generic slots but instead proved they have what it takes to develop their own pay mechanics, features and reel modifiers as well as launching them successfully into an increasingly crowded market that online gaming is today.

Two of their signature features are xWays and xNudge Wilds. Both will modify a spin result to give players more chances to score a win and on Dragon Tribe, we see them for the first time being combined with cascading reels and their Volatility Extreme math model. No doubt, a combination with explosive win potential that we have come to expect from games with the fire-breathing creatures. After all, they are just as volatile.

At the core of the gameplay is a 6×4 reel set with 4,096 ways to win featuring the cascading reel mechanic, where at the start of a spin sequence symbols blocks tumble from the top into position. All symbol blocks from winning combinations will shatter and disappear while the remaining blocks drop towards the bottom of the game window. New symbols will then cascade into the empty spaces, potentially creating new winning combos which will see the procedure being repeated. This continues until no new wins occur after a cascade.

The two modifiers will come into play when the respective symbol lands at any time during a spin sequence. An xNudge Wild appearing on reels two to five will fall down to the bottom position on the reel it landed on and will increase the win multiplier by x1 for every position it drops. Once it reaches bottom, the wild will expand to cover the entire reel, displaying the activated multiplier. For example, if an xNudge Wild lands on the top row, it will drop down four positions before it hits bottom and thus the win multiplier will increase to x4. The maximum per wild is x6 when the game window is expanded to six rows via the xWays mechanic (more to that shortly). Should you have xNudge Wilds on more than one reel, then all multipliers will be added, providing the potential for a maximum win multiplier of x24.

The second modifier is the xWays mechanic, which has the potential to increase each reel from four symbols up to six positions. Any time an X-icon lands during a spin sequence it will create either two or three matching symbols on the same reel, thus raising the number of positions on the respective reel. Since the symbol can appear on all six reels, the game window can potentially grow to a 6×6 format with 20,736 ways to win. Any expanded reels will stay until the end of a spin sequence and will reset before the start of the next round. A display on top of the centre reels will show the current ways.

Having three Bonus scatters in view at the end of a spin sequence will trigger 10 Dragon Spins. Any further scatter will add +3 free spins. The game will lead to a second screen displaying two options for your bonus round. You are free to select any of the two options on every trigger. And there is more. A bar with all five dragon symbols will appear on the left of the game window (desktop version), each with a 3-point counter. Every winning cascade will illuminate one point. Once you have three, the respective dragon symbol will become a dragon wild symbol for the remainder of the feature. These wilds are standard wilds and will not work like the xNudge Wilds. Plus, you will get +2 free spins for every transformed dragon.

Done let the cute appearance of the cartoon-style dragons fool you, this game is highly volatile just like the fire-spewing creatures. We might have noted medium and high volatility for the bonus rounds, but the choice is effectively high or very high volatility. All being said, it is a great-looking and entertaining slot from upcoming studio NoLimit City that will propel them further towards becoming a Tier 1 provider.