Get ready for a visit to the most bustling town in 19th century Arizona as the rush for silver and gold mines saw thousands of prospectors, adventurers and outlaws descend on the small town close to the border with Mexico. NoLimit City is taking us back in time on the Tombstone slot with nudging outlaw wilds and three free spins features that can lead to wins of up to 11,456x your bet

Tombstone is a video slot with five reels in a 2-3-3-3-2 format and 108 fixed ways to win. Pays are awarded for adjacent symbols from left to right only. You can join the silver and gold rush on desktop, mobile and tablet from 0.10 to 50 credits per spin. The RTP of this high variance game is set at 96.18%.

In its heyday, Tombstone had over 100 saloons and gambling halls and that with just over 10,000 citizens. To this day, the town is well-known for the epic gunfight fight between lawmen and a group of outlaws at O.K. Corral. NoLimit City placed the game window at the entrance of a typical saloon from the time with the rugged terrain of the plains in the background. A classic Western track is only interrupted by bullet sounds hitting the reels and other reel noises. 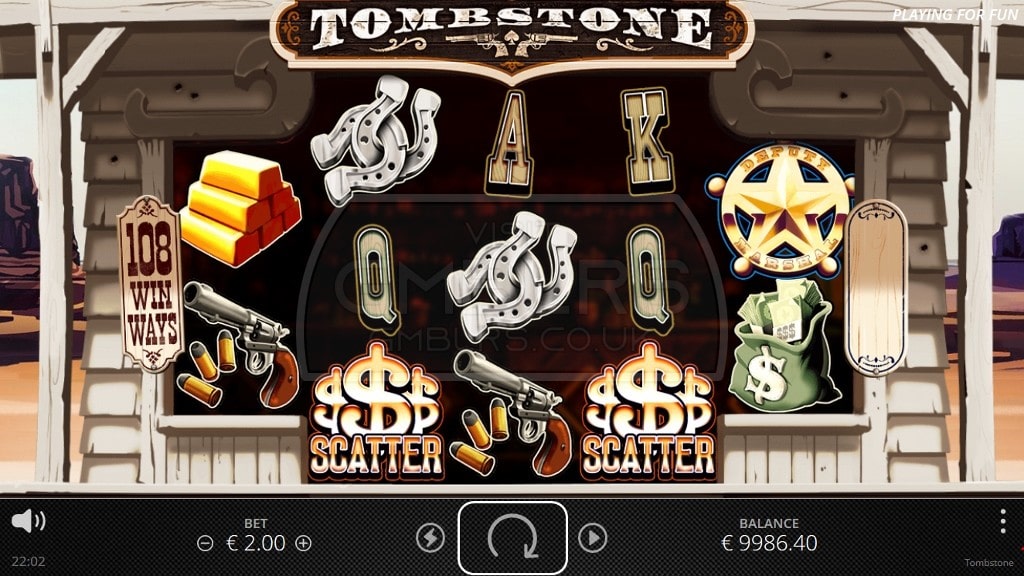 The pay symbols start at the low end with J, Q, K and A, each paying 2x your bet for a single five of a kind. They are followed in ascending order by colts, horseshoes, green bags full of $$$, gold bars and dynamite bundles. Hit five across the reels to win from 3x to 6x your stake.

Three outlaws – horse thief Skinny Joe, bank robber Edda Starr and notorious bandit “El Gordo” – are the wild symbols, appearing on reels two, three and four respectively. They are stacked three symbols high and will nudge to cover the entire reel when they land only partially in view. They substitute for all symbols bar the badge symbols and scatters.

The Tombstone slot has three types of scatters. On reel one it is a sheriff badge, on reels two, three and four it is an icon with three $$$ signs and marked with the word ‘scatter’ and on reel five it is a marshal badge.

Any of the outlaw wilds landing only in partial view will nudge until it covers the entire reel. For every nudge, the win multiplier increases by x1, leading to a maximum x3 multiplier when a wild lands either in the top or bottom position on the reel. It will then nudge two times to move into full view, step one increases the multiplier to x2 and step two to x3. The multiplier will reset to x1 before the next spin starts.

NoLimit City gave the slot not just one, but three types of free spins features. Get ready for sticky outlaw wilds, progressive multiplier and the ultimate, a combination of both. None of the features can be retriggered.

Slotting veterans will see some Dead or Alive being resurrected on the Tombstone slot. It surely feels a little like a sibling to the epic DOA with the sticky wilds and even has similar win potential. The game will be exclusive to the LeoVegas Group until 2nd May 2019 and will go global thereafter.

Remember, you can play Tombstone here