Join the covert circle of some of the most elusive spies on the slot from Playtech. Unleash high-tech gadgets in your reel missions to retrieve big wins exceeding 3,000 times you bet or the ultimate, a progressive jackpot. A symbol upgrade and a free spins round will be your path to completing your mission.

Spy Rise is a video slot with five reel, four rows and 40 fixed pay lines. Wins are paid for three to five symbols on a line from left to right only in the base game and both ways in the free spins. You can go on your mission on desktop, mobile and tablet from 0.20 to 100 credits per spin. Activating the top level of the Feature Bet will see that rise up to 0.60 to 300 credits per spin. The RTP of this medium variance game is set at 95.02% with includes a 2% contribution to the progressive jackpot.

Your mission will take you to a neon-lit Asian metropolis at night. The traffic is still buzzing on the roads while you stand on top of a skyscraper plotting your next steps on how to enter the safe room and crack the code. A suspenseful electronic soundtrack accompanies the action on the reels 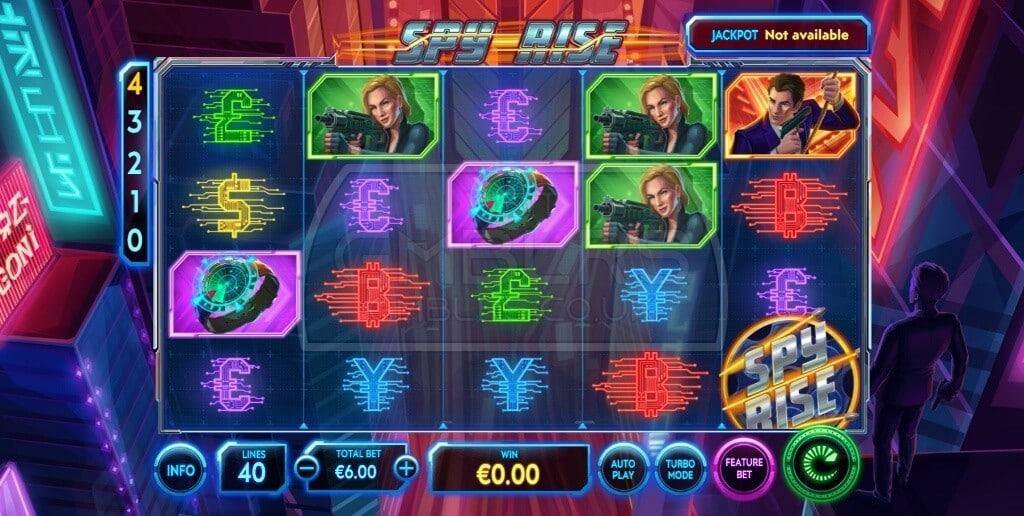 For once we do not have card royals at the low end of the pay table. Instead, Playtech opted for Euro, Pound, Dollar, Bitcoin and Japanese Yen logos in neon colours. They are followed by watches, sports cars as well as a female and a male spy. The safe door is the wild symbol, substituting for all regular pay symbols. The default wins for a five of a kind range from 3x to 50x bet. Activating the feature bet will gradually increase the payout for the premium symbols including the wild. The slot logo acts as the scatter on the slot, appearing on reels one, three and five only.

The slot has the option to upgrade payout for the high-value symbols. It loads as default with the Feature Bet switched off. Clicking on the purple coloured Feature Bet button will open a display on the right of the game window, showing the watch, the sports car, the female agent and the male spy. You can now click on any or all to activate the Feature Bet for the respective symbol. Any activated Feature Bet can be deactivated before a new spin starts in the base game.

Payouts for a single five of a kind will be doubled relative to your default bet as a result. It will cost you 50% of your base bet for each upgraded symbol upgrade. For example, the minimum bet of 0.20 credits will increase to 0.30, 0.40, 0.50 and 0.60 when you upgrade one, two, three or all four symbols. As the cost increases substantially, we recommend some caution on the usage.

Hit scatters on reels one, three and five in one spin to trigger 10 free spins which cannot be retriggered. Any upgrades active on the triggering spin will be carried over into the bonus round. Plus, you will benefit from wins being awarded both ways for the duration of the feature.

The Spy Rise slot has a single progressive jackpot which can trigger randomly on any spin in the base game. It is a pooled jackpot from all participating casinos with 2% of each bet contributing to it. To trigger it, you will need the reels to turn to a red background. Having all five reels red will complete a picture of you standing in front of the safe after having cracked the code, ready to collect the progressive jackpot. The game will pay 3x and 25x the total bet when only three or four reels turn red.

Spy Rise is a decent effort from industry giant Playtech. It is well designed and has plenty of opportunities to score big wins. In order to hit the maximum win of 3,333.33 x your bet, you will need to score a full screen of the male agent in the free spins. That should not deviate you though from your mission to trigger that progressive jackpot which can go into six-figure sums.