Hone you reel-spinning skills to become a member of the Joker Troupe on the slot from Push Gaming. The game is yet another colourful creation from this developer that combines traditional fruit machines with exhilarating modern twists. It all comes together in a high-volatility reel ride that is at the core of most slots from Push Gaming. Each of the three Jokers on the reels will trigger their own feature with bonus wheels, time-stopper free spins and expanding reels that can lead to wins of up to 25,367 times your stake.

Joker Troupe is a video slot with four reels, three rows and 10 pay lines in default mode. It can expand by multiple rows during one of the features. You can hone your artistic spinning skills on desktop or mobile from 0.20 to 200 credits per spin. Some operators might limit the maximum bet to a lower value. The game is highly volatile with a generous RTP of 96.68%.

While completing an extended test run, I spend the best part of an hour thinking on how to describe the design and graphics. There is no clear scene or theme and normally we would call that a generic background. But there is something about it that makes it look modern and fresh. Geometric icons adjust in colours throughout the gameplay while they are floating around the square-looking game window. Small small particles seem to be emanating from the illuminated frame that will further light up on teaser spins. A fast-paced EDM soundtrack provides the perfect audio to this exhilarating reel ride. 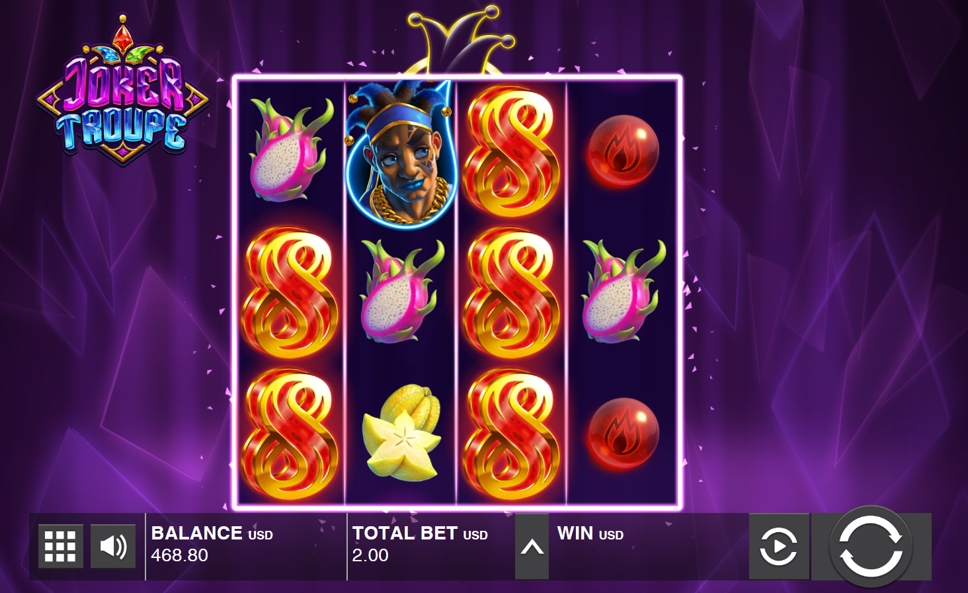 Surprisingly there are only six pay symbols on the reels. In ascending order they are red and blue and red globes symbolizing water and fire, followed by star fruits, dragon fruits, a pair of fantasy dice and a lucky 8. Hit four on a line to win 1x to 100x times your stake. The game has three scatter symbols – Red, Blue and Green Joker – all appearing on reels two to four only.

Trust Push Gaming to create something special out of even the most simple slot. All their latest releases have been a showcase of masterful craftsmanship and superior mathematical designs that have surprised players time and again with novel pay mechanics, exhilarating bonus features and most of all mega win potential.

Looking at a 4-reeler with just 10 pay lines usually wouldn’t have players lining up to give it a spin but rest assured, you will. For starters, you can score mega wins of up to 1,000 times your bet in the base game when you hit a full screen of lucky 8s. Where many slots have that kind of potential in their entire gameplay, it is only the hors d’oeuvre on Joker Troupe.

Hitting three red, green or blue Joker symbols anywhere on reels two, three and four in one spin will trigger their respective feature. Each has its own distinct reel or pay mechanic and together they can lead to wins of up to 25,367 times your stake. First up is the Green Joker. Landing three will trigger the Green Joker Wheel. A bonus wheel with 12 coin segments and 2 Booster segments will appear, giving you initially one spin. Stopping it on a coin win segment will award the respective prize – 1x, 2x, 5x or 10x your total bet multiplied by the displayed multiplier. The respective segment will be darkened and landing a second time on it will end the bonus game.

Hitting repeatedly the dark-red Booster segment will award in consecutive order an x2 multiplier, an x5 multiplier and lastly entrance to the Red Joker Free Spins feature. All hit multipliers are multiplied by each other with the maximum peaking at x100. For example, when the wheel stops on x2 on one segment, followed by x2 on the second segment and x5 on any of the two segments it will lead to a 2x2x5 = x20 multiplier.

The second is the Blue Joker Feature, awarding initially three respins with only Blue Joker hats and Red Joker symbols on the reels. The aim is to land more hats to increase the game window and the win multiplier. The round starts with three respins in a 4×3 format with the three triggering scatters locked in place and an x1 multiplier. Landing a blue hat or a Red Joker will reset the respin counter to three.

An extra row is added on top of the game window for every three collected blue hats and/or Red Joker symbols and the win multiplier increased to x2, x3, x5, x10, x15 and ultimately x25. Once you run out of respins, each blue hat in view will award a coin win that will be multiplied by the active multiplier when they landed. The blue hats appear in four different versions, each paying one of two coin wins.

Each hat landing on the reels during the respins will be marked by the respective multiplier. At the end of the round, all prizes are revealed and paid in one amount. The game window resets to the default 4×3 size before the next spin starts. Three Red Joker symbols in view at the end of the feature will lead to the Red Joker Free Spins.

Brace for the Red Joker Free Spins as it will be a fast-paced affair, so fast they called it Hypermode. Initially, the game award 20 seconds of free spins. A meter and clock on top of the game window display the progress. Any Red Joker symbol landing on the reels will be added to the meter. Once filled, it will retrigger an extra 10 seconds and speed up the reels as well as adding more lucky 8 symbols to the reels. Do it multiple times and the reels will be flying past, so fast that you might even miss a winning combination. The round ends when you run out of time.

Well, we expected something special when Joker Troupe was announced and that is exactly what we got. Their immensely successful Razor Shark release just weeks earlier left us guessing what else the creative team would have up its sleeve. The result is a fast-paced, high-volatility, maximum-exhilaration monster that will have you buzzing in every session.

Our best wins in the first test runs came in at 234x and 787x bet, leaving us very impressed but it nearly ate our starting balance at some point. Hence, some caution on the bet size is recommended as usual for this kind of slot.