To date, we have been blessed with some seemingly strange yet exhilarating slots from Push Gaming. They have advanced to becoming a specialist for new pay and reel mechanics that defy at first our logical understanding of how we are going to score mega wins. But they all turned out to be huge hits with players and the world wide web is virtually littered with videos and screenshots of wins exceeding 5,000x or even 10,000x the stake. Wild Swarm, Jammin’ Jars and Immortal Guild are just some of the prime examples of their creativity and imagination.

So, where does The Shadow Order slot come in? The members of this ancient organization work covertly in the halls of power on the slot from Push Gaming. Always adhering to their own system of morality, veiled in the power of hidden symbols, secret cyphers and mysterious orbs, the members of the order can lead to wins of up to 24,204 times your stake.

Push Gaming created a suspenseful storyline that follows the four members as they uncover the hidden secrets and treasures on the reels. Wild orbs rolling across the reels trigger unique features should they roll into one of the three blue Hotspots. Collect them when they fall down to the bottom right corner to trigger free spins with progressive multipliers, sticky wild orbs and retriggers. Plus, the four characters are gradually unlocked by collecting secret society rings in the base game, each unleashing its own powerful random reel modifier.

The Shadow Order is a 5×5 grid slot with cascading symbols, featuring three wild orb modifiers, collectable symbols, four character modifiers and a free spins round. Join the secret society on desktop or mobile from 0.10 to 100 credits per spin. The highly volatile game has an RTP of  96.51% in default mode, increasing to 96.98% when all four characters are unlocked.

At the start of every spin sequence, 25 symbols drop onto the game grid. Wins are awarded for three to five matching symbols landing horizontally or vertically adjacent. The symbols, except wild orbs, will then be removed and the remaining symbols will drop down before new symbols fall into place to fill up the empty spaces. The sequence continues as long as you hit a win after a fresh cascade. Any progress on the orb meters is reset at the end of every spin sequence.

Set against the mansion of the secret society, the 5×5 grid is flanked by three meters that will illuminate or activate throughout the gameplay. On the top are the wild orb meters which will charge via consecutive cascades and drop the respective orb onto the grid once the meter is fully charged.

To the left is the free spins meter that will illuminate progressively as you collect the three orbs when they fall into the bottom right corner. On the right stands the current active member with a collection meter which will progress when you hit secret society ring symbols in a spin sequence. A suspenseful soundtrack is creating the right atmosphere as the mystery on the reels unfolds. 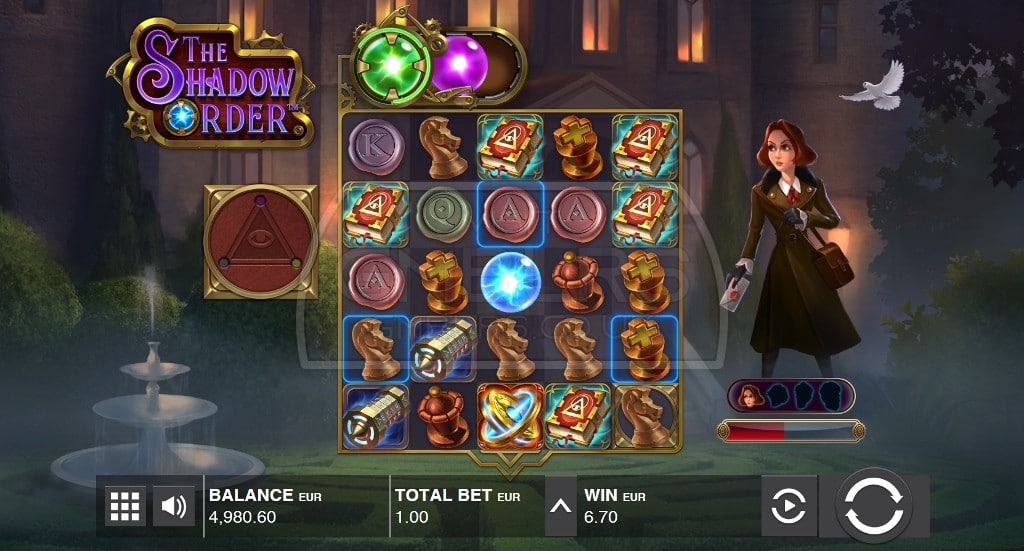 The symbol set consists of intricately designed icons with great attention to detail. At the low end are the card royals Q, K and A in form of ancient wax seals. Five adjacent symbols will pay 1x to 2x your stake. They are followed on the medium level by three chess figure – knight, queen and king – paying 6x to 10x your bet for a five of a kind. The premium symbols are a Cryptex, the Shadow Order code book and a golden coin-ring arrangement. Wins for a 5OAK increase to 60x to 120x your bet.

The Shadow Order medal is the wild and top-paying symbol, substituting for all symbols bar orb symbols. Hit five adjacent in a spin sequence to win 300x your stake. The blue, green and purple orbs will drop onto the grid when they are unlocked and act as well as a wild symbol. There are no scatters on the reels as the free spins are triggered by collecting the three orbs through a new mechanic.

Three orbs are sitting in the top left corner which will become successively active when their meter is fully charged. The first orb needs three consecutive cascades within a spin sequence while orb two and three need only two cascades to activate. Multiple winning combos in a cascade count as a single charge.

Once activated, the orbs will fall into the empty space before new symbols cascade into place and will act as a wild symbol. The orbs are rolling downward and to the right when space is freed by winning combinations. If an orb lands in one of the three hotspots, its feature will be triggered when you don’t score a win after cascade.

Orbs will be locked in the hotspots until their feature has triggered. Any other orbs on the grid are also locked while a feature is active. Once it concludes they are free to move again. The aim is to get all three orbs to the collection tile in the bottom right corner. Once they reach the spot, they will be added to the free spins meter on the left of the game window. Collecting all three orbs within a spin sequence will trigger the free spins feature.

The Power of the Shadow Order Members

More reel modifiers can be randomly triggered by the four members of the Shadow Order – Molly, Billy, Archie and Amarillo. They are successively unlocked by collecting ring symbols in the base game. Any ring icon landing will be added to the meter below the current character. The icon will then be replaced with a random pay symbol.

You will unlock the next character once you complete the progress bar for the current one. We played the game extensively and it took us 500 to over 1,000 spins to unlock one character. You can pick any unlocked character to be active in your session and you can change them before any spin in the base game. Unlocking the members is not bet sensitive and the current status is saved for each casino account. Hence, you will have to unlock them once at each of your gaming hangouts.

Collecting all three orbs within one spin sequence will trigger five free spins and lead you into the secret meeting room inside the order’s mansion. All three orbs are fully charged at all times in the free spins, meaning they will drop onto the grid the soon a space opens up. They will stay sticky when no winning combination occurs on a free spin. The aim and kicker in the free spins are again to get them into the collection spot in the bottom right corner. Each collected orb will increase the win multiplier by x1, no limits. Plus, you will get +2 free spins every time you collect all three orbs. They will then be moved back to their window in the top left corner, fully charged and ready to drop in at the next opportunity. The feature ends when you run out of free spins.

Phew, this is a monster game with monster mechanics and monster win potential. Just like Wild Swarm and Immortal Guild, it will take some time to understand how it all works. But once you got the hang of all the modifiers and possibilities, you get to enjoy a hair-raising reel ride with high volatility, full of suspense and chances to hit mega wins in the base game and free spins. We scored in our test runs wins of 175.8x in the base game and 743x in the free spins, so the potential is indeed there.

Remember, you can play The Shadow Order here