Enter the Colosseum in ancient Rome to watch fearless gladiators facing wild tigers on this high-variance slot from Playtech subsidiary Quickspin. The Swedish game studio is usually known to create games with low and medium volatility but on Tiger’s Glory they raised the ante with a blistering win potential of 12,000 times the stake in the free spins. A clear departure from their normal offerings. The main attraction on the game is a free spins round with enraged tigers that will become sticky scatter pay symbols.

Tiger’s Glory is a video slot with six reels, four rows and 4,096 ways to win. Pays are awarded for matching symbols on adjacent reels from the left. Entrance to the Colosseum starts at 0.40 credits that can be raised to a maximum of 100 credits. The RTP of this high variance game is set at 96.51%. The slot is designed in the latest HTML5 standard, making it available for play on tablet, mobile and desktop. The maximum win potential is officially stated with 12,000x the bet, however Quickspin has observed wins of up to 13,830x the initial stake.

The Colosseum was the place where gladiators would entertain large crowds with fights against each other. However, the shows reached their climax when they were facing wild beasts such as tigers. Naturally, the Colosseum serves as the backdrop on Tiger’s Glory with the game window flanked by two columns. Quickspin has dug deep into their creative chest to reproduce the vicious tiger fights on the reels in a stunning animation that opens up once the start fights. In contrast to the beastly action, they chose a classical piece as the basic soundtrack. Howeverm, it will change dramatically when a fight erupts. 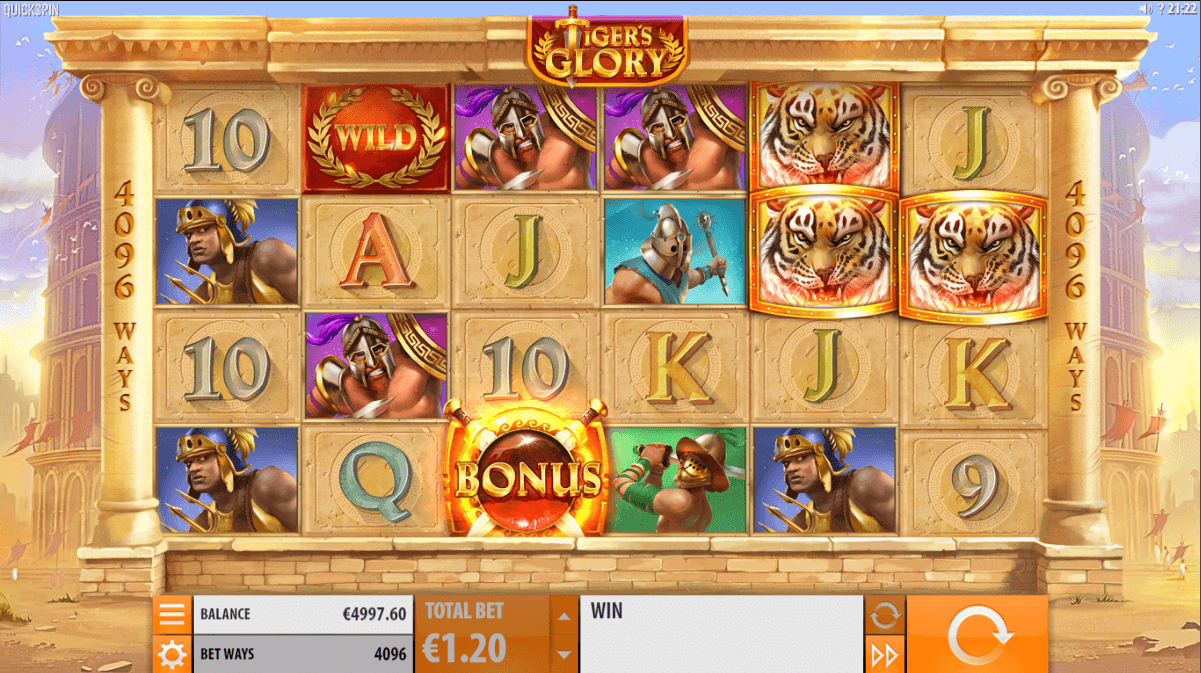 The usual card suits are waiting on the low level with 9 to A’s paying two to three times the stake for a six of a kind. They are followed by four gladiators and the tiger with pays for a six of a kind increasing to 5x, 6.25x and 10x the stake. A red tile with a laurel wreath is the wild symbol substituting for all symbols except scatters and enraged tiger symbols. Scatters are an intricate symbol with a sword and a shield.

Tiger’s Glory has only one feature, but it carries a powerful punch once enough enraged tigers are on the screen. Three to six scatters in one spin will trigger 7, 10, 15 or 20 free spins respectively. When activated, the game will add the Enraged Tiger symbol to the reels, easily spotted by the red frame ornamenting the tile. The enraged tiger will face one of the gladiators when it lands on the reels in the free spins and will turn into a sticky scatter for the remainder of the bonus round, if it defeats the gladiator.

The sticky tiger symbols do not need to be on consecutive reels to award a win. Two to six scattered sticky tiger wilds will pay one to 10x the bet on each spin, starting on the spin they have turned into sticky symbols. Up to six extra free spins can be triggered during the feature. The game will add one free spin for the first sticky tiger symbol on each reel.

Quickspin has not only gone into high volatility with Tiger’s Glory, but they also turned the odds around in the tiger fights. In contrast to our human instinct, we will be rooting for the tiger to win the fight against the gladiator as only then will he turn into a sticky scatter in the free spins. The game in itself is a feast for the eyes with intricate graphics and impressive animations during the tiger fights. Add to that the sky-high win potential and you have a great slot for fans of high volatility games.