Follow the four wicked Rocket Fellas down the mine for an explosive adventure on the slot from Swedish game studio Thunderkick. They will set off rockets from reel one to turn target barrels on the same row into wild symbols. It will get even better in the free spins round as the wilds will become sticky for the remainder of the bonus round. Dig deep for the precious gems in the mine and you could be rewarded with up to 7,325 times your stake.

Rocket Fellas Inc. is a high-variance video slot with five reels, four rows and 30 fixed pay lines. As usual with Thunderkick slots, bet sizes range from 0.10 to 100 credits. An RTP of 96.10% will be helpful to extend those mining expeditions. Being designed in HTML5 format ensures the game can be played on desktop or on the go from a mobile device. You can use Autoplay to set up 5 to 5,000 consecutive spins.

A frameless semi-translucent game window is set in the midst of a mine, sparsely lit by two oil lamps. Explosive used in the mine are stored on the left of the game window. The four miners are the main attraction on the reels, each being animated when they land. The best animations happen though when rockets are launched from reel one. A disco soundtrack is accompanied by the usual thumping sounds when rockets or scatters land on the reels and goes into a dramatic crescendo on big wins. 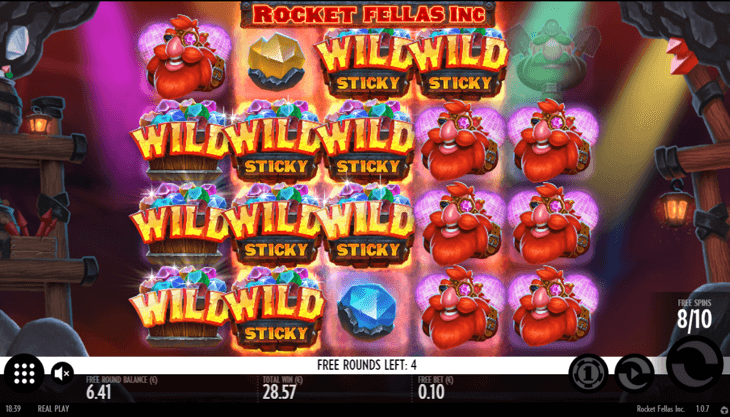 All pay symbols except scatters can appear in stacks of up to four symbols high. Gems in blue, green, yellow and red colours are at the low end, followed on the medium level by the four Rocket Fellas. Line up five on a pay line to win 2.5 to 15 times your bet. Top symbols are the target barrels and wild symbols, paying 30 times your stake for a five of a kind. Scatters are a fist with the word bonus at the bottom.

Three to five scatters anywhere on the reels will award 10, 15 and 20 free spins. Two or more scatters during the bonus round will award an additional three to 20 free spins indefinitely. The rocket feature will get an extra twist in the free spins. Any hit target barrel will turn into sticky wilds for the remaining free spins. Plus, any wilds on the same reel will also become a sticky wild, providing the potential for mega wins of up to 7,325 times your stake.

Having tons of fun on a quirky slot and the prospect to hit mega wins – that sounds like slot playing heaven. Indeed, Rocket Fellas Inc. is entertaining with some hilarious characters and interesting pay mechanics. Not to forget that monster win potential of 7,325 time the stake. That would lead to a serious amount of money even on smaller bets. Ready for your mining adventure?