Let the two towering Moai statues welcome you to their Pacific paradise on the slot from Yggdrasil Gaming. Easter Island is taking you on a tropical reel adventure with an expanding reel set, symbol swap respins as well as sticky and expanding wilds that can lead to wins of up to 2,600 times your bet.

Easter Island is a video slot with five reels, rows and 27 pay lines as default. This can increase during the gameplay to up to 7 rows and up to 103 pay lines. Wins are awarded for two to five matching symbols on a line from left to right only. You can journey to the tropical paradise on desktop or mobile from 0.10 to 200 credits per spin. The game has medium volatility with an RTP of 96.10%

A mirthful and mana-filled mystery island is opening up when you load the game with the two hilarious moai statues flanking the stone reel set. More statues are spread around the lush greenery in the tropical paradise. A Caribbean soundtrack provides the fitting audio that is regularly interrupted by the voices of the statues. 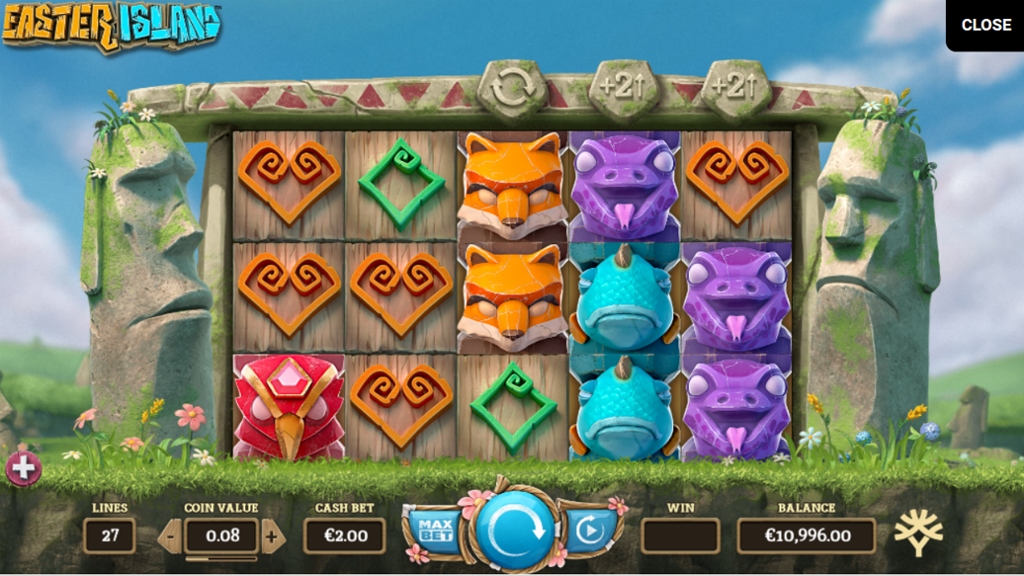 The pay symbols appear stacked at all times, starting at the low end with the card suits – spades, clubs, diamonds and hearts – all held on wooden blocks and awarding 0.8x your bet for a single five of a kind across the board. They are followed by animal icons with the red eagle being the top payer. Hit five across the reels to win 1.6x to 20x your stake. A golden animal icon marked with the word itself is the wild symbol, appearing on reels two and four only and substituting for all regular symbols.

Yggdrasil Gaming decided to forgo the usual bonus features or free spins rounds we find in video slots. Instead, they went a route that is based on three intriguing reel mechanics that will trigger at various points during the gameplay. And that is not the end yet. Landing a wild on the initial spin or respin on reel two and/or four, will trigger the Expanding Wild feature.  The wild will expand to cover the entire reel, providing extra win potential. Should it land on the initial spin, then it will turn into a Sticky Wild for the respin after the expansion. All modifiers and expansions will reset to the default 5×3 size with 27 pay lines once the respin concludes and any potential wins are paid.

Well, did we enjoy our reel trip to Easter Island? It most certainly is a different kind of gameplay as you have to make do without the usual bonus features. Still, there is plenty of action on the reels with the respins and expansions, all garnered by the hilariously animated stone statues.