Relentless. Unforgiving. Brutal! Prepare for an extremely volatile reel visit to the famous maximum-security prison on the slot from Nolimit City. San Quentin xWays will see you heading behind bars with convicted felons Crazy Joe Labrador and Beefy Dick for a high-risk, high-reward roller-coaster across five reels with Split Wilds, Enhancer Cells unveiling Razor Splits and xWays mechanics as well as a Lockdown Spins round with Jumping Wilds and multipliers of up to a dizzying x512 that can lead to wins of up to an insane 150,000 times your bet.

San Quentin xWays is a video slot with five reels, three rows and 243 ways as default. The various features included in the gameplay will increase the number of ways with no real set upper limit. Theoretically, a staggering 13,189,257,216 ways are possible. Wins are awarded for three to five matching symbols landing on adjacent reels from left to right only. You can join the inmates for a reel session on desktop, tablet or mobile from 0.20 to 32 credits per spin. The game has extreme volatility (10/10) with a default RTP of 96.03% and a hit rate of roughly 1:3 spins. Some operators will offer it in the DX version with 94.11%, always check the help files to find out which version you will be playing. Using the Bonus Buy feature will increase the default RTP to 96.26 – 96.95% based on which option is purchased.

Located north of San Francisco, San Quentin is the oldest prison in the US, initially commissioned in 1852 and housing some of the most dangerous inmates as well as the largest death row in the entire country. Given its notorious reputation, it seemed like the fitting location for such a volatile game. The design team at Nolimit City went to great length to create authentic visuals and animations with a soundtrack to match. The outer wall of the prison together with lighting poles and watchtowers are the canvass for the reel set that in itself has two extra rows with locked prison cells that will open up when various features are triggered. Five inmates dominate the paytable while a display on the left of the game window will make sure you can keep track of how many bet ways are currently active.

The pay symbols start at the low end with a toilet roll, handcuffs, shivs, Zippo lighter and a soap, awarding 1.5x to 2x your stake for a single five of a kind. They are followed by five San Quentin inmates – Crazy Joe, Heinrich 3rd, Loco Luis and Beefy Dick. Hit five across the reels to win 2.5x to 5x your stake. A police badge is the wild, substituting for all regular symbols, while a San Quentin prison tower acts as the scatter. The Enhancer Cells on the top and bottom of the reels can contain special symbols including Razor Splits and xWays (more to that shortly).

As we do speak regularly with Nolimit City folks, we knew early on that they had a monster slot in the works that would let their most volatile games such as Deadwood and Punk Rocker look like a leisurely walk in the park. When the first details leaked a few weeks before release, it became clear that they indeed put their money where their mouth is. Not only that, but they also placed it in the most fitting surroundings to match the extreme volatility. So, buckle up as we take you on a rollercoaster through all features. 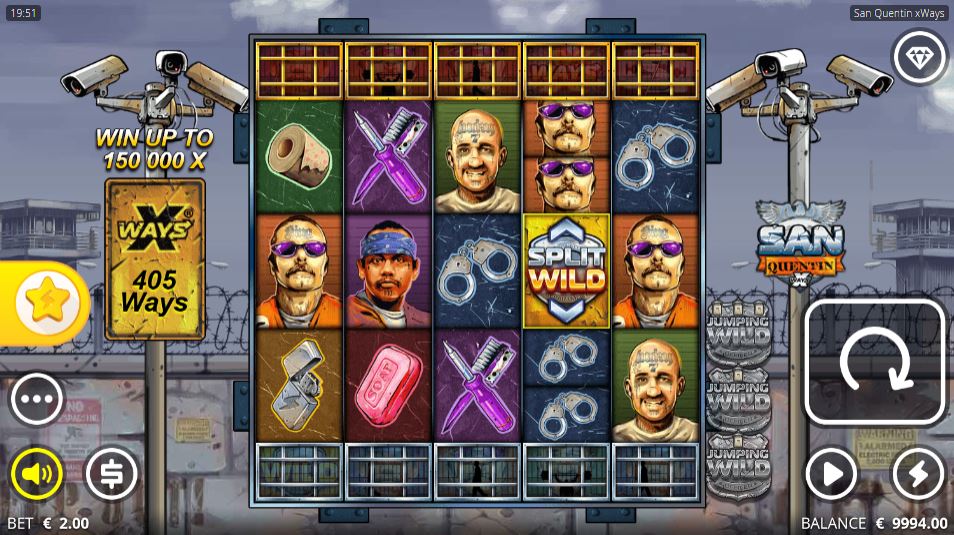 At the core of the base game are two mechanics – Split Wilds and Enhancer Cells. Both have the potential to deliver big and even mega wins whereas the Split Wild is the more common to occur. It can land on any reel and will split the other symbols on the same reel into two (reel 4 in the screenshot above), thus increasing the overall ways to win. However, the wild itself does not split. More visual action and win potential lurk in the Enhancer Cells, the two caged rows at the top and bottom of the reels. Landing one or two scatters will activate both cells on the respective reel. They will open and reveal one of four options, thus increasing again the overall ways to win. The triggering scatters themselves will turn into a wild symbol. In the base game, all modified reel positions and the open cells will reset before the next spin. Landing three, four or five San Quentin tower scatters will trigger the Lockdown Spins feature with 1, 2 and 3 Jumping Wilds respectively. Before the start of the round, the game will clear the regular symbols and replace them with blanks and a caged icon with a mystery inmate to determine the win multiplier for one symbol and the number of free spins. Only the reels where a scatter landed are active for this part while the remainder is caged.

First, all open reels will spin once with each mystery inmate symbol increasing the symbol multiplier by x1. Once all reels have stopped, the mystery symbol will reveal one of the five premium characters or the Jumping Wild. All wins with the revealed character will be multiplied by the accumulated value. In turn, the Jumping Wild will start with the given multiplier, which can be doubled repeatedly during the feature, up to a maximum of x512.

Once the mystery symbol and multiplier are determined, each open Enhancer Cell at the top and bottom of the reels will spin once to award 1, 2 or 3 Free Spins. However, if you started the feature with three or four scatters and thus one or two reels with locked Enhancer Cells, then any scatter landing in the free spins on a locked reel will open the respective cells and award extra free spins as well as one additional Jumping Wild. The overall maximum with all Enhancer Cells active peaks at 30 free spins, which cannot be further retriggered. The maximum number of Jumping Wilds is three. Scatters are removed once all Enhancer Cells are opened. Ready for prison mayhem and chaos? You will be heading into the main event after the mystery symbol and its multiplier, as well as the number of free spins, have been determined. The Enhancer Cells on the reels where the triggering scatters landed will be opened throughout the feature, landing on each free spin one of the four options as in the base game – premium symbol, wild, Razor Split, xWays.

At the start of each free spin, the symbols in the Enhancer Cells will appear first, determining the modifiers for the spin. The main reels will then come to a stop and the win evaluation is done. Landing a Jumping Wild on the same reel as a Razor Split enhancer will double the wild multiplier, up to a maximum of x512. Given that you can have up to three Jumping Wilds in play in a bonus feature, you could end up with an insane total wild multiplier of 3 x 512 = x1536 when all three are part of the winning combo. The round ends when you run out of spins or hit the max win cap of 150,000 times your bet.

Too impatient to wait for an organic trigger of prison revolt? Then the NoLimit Bonus Feature Buy button will be at your disposal to gain direct entry to the main event (restricted in some jurisdictions) although the price for the third option is just as brutal as the extreme volatility of the slot. It will cost you 100x or 400x your default bet for the Lockdown Spins with three and four scatters respectively. The option with 5 scatters will set you back by a staggering 2,000x your stake. In all cases, the game will start a spin and land three, four or five scatters based on the purchased feature. The following bonus round and mechanics are identical to a standard feature. Any potential line wins on the triggering spin are added to the total win from the feature.

Relentless. Unforgiving. Brutal! It seems fitting to repeat the intro as San Quentin xWays turned out to be exactly how it was announced. The base game proved surprisingly well-balanced with sufficient wins happening frequently to avoid a quick and total destruction of the playing balance, yet still remain highly volatile. Don’t be fooled though, the game will eat you alive at times. What pushes the volatility to the extreme is the bonus feature. We scored anything from less than 10x bet to 3,932x during our testing runs. With an average trigger happening every 230 spins, it will be vital for you to not drop your soap, figuratively speaking!