Travel to Midgard for a fiery encounter with the mighty Norse god on the slot form ReelPlay. Odin Infinity Reels featuring Megaways is the first game to combine the two popular reel mechanics for virtually and literally infinite ways to win. The one-eyed King of Asgard is calling on his magical rune stones to enter the reel battle for great wealth and fortune featuring progressive multipliers, an infinite number of reels and a jackpot pay of 888x your bet in the base game. Collect five Gungnir swords to trigger the free spins with an unlimited rising multiplier incrementing by up to x4 and infinite retriggers that can lead to wins of up to 20,000 times your stake

Odin Infinity Reels featuring Megaways is due for an exclusive prerelease at LeoVegas on 8th July 2020 and will go global across the Relax Gaming network one week later.

Odin Infinity Reels featuring Megaways is a video slot with three reels as default, each with two to five symbols, with more reels being added as long as a winning combo is improved. Pays are awarded for minimum three matching symbols on adjacent reels starting from the first. The number of reels and bet ways can grow without limits during the gameplay, courtesy of the two reel mechanics (more to that shortly). You can travel to Midgard on desktop or mobile from 0.30 to 12 credits per spin. The game has maximum volatility (5/5)with an RTP of 96.18% and a hit rate of roughly 28%.

A mesmerizing scene of Midgard is opening up when you load the game. Rune stone formations are leading the way to Asgard, home of the revered Norse god Odin. A rainbow and the first sunrays after a thundery day are lighting up the green realm surrounded by snowcapped mountains while an intense soundtrack accompanies the action on the reels.

The pay symbols start at the low end with six stones carrying rune inscriptions in green, yellow, turquoise, blue, red and purple colours. They are followed by a raven, an eight-legged horse, a wolf and Odin himself. The latter is the most valuable with 0.266x your bet for a single win way. The interlocked triangle sign known as Valknut is the wild symbol, substituting for all regular symbols while Odin’s sword Gungnir acts as the scatter. Coins wins are awarded for minimum five scatters at 0.2x bet each.

We are returning to the Norse lands on this bold creation from ReelPlay that features their proprietary mechanic Infinity Reels in combination with the Megaways game engine. It simply can’t get any bolder than that. While one is adding reels ad infinitum, the other is creating a random number of ways to win on every spin. Throw in a progressive multiplier and the possibilities are indeed infinite.

Let’s take a closer look at how a spin sequence unfolds as that is core to the gameplay as well as to hitting megawins of up to 20,000 times your bet. All spins start with three reels and the Megaways engine randomly selecting two to five symbols per reel. To score a win you will need to land matching symbols on all three reels starting from the left. Once that happens, or if you hit minimum two scatters on reel three, an extra reel is added to the right, again with a random number of two to five symbols. The new reel will spin once while the others are held to potentially land more matching symbols or scatters in which case the process is repeated, well, ad infinitum. 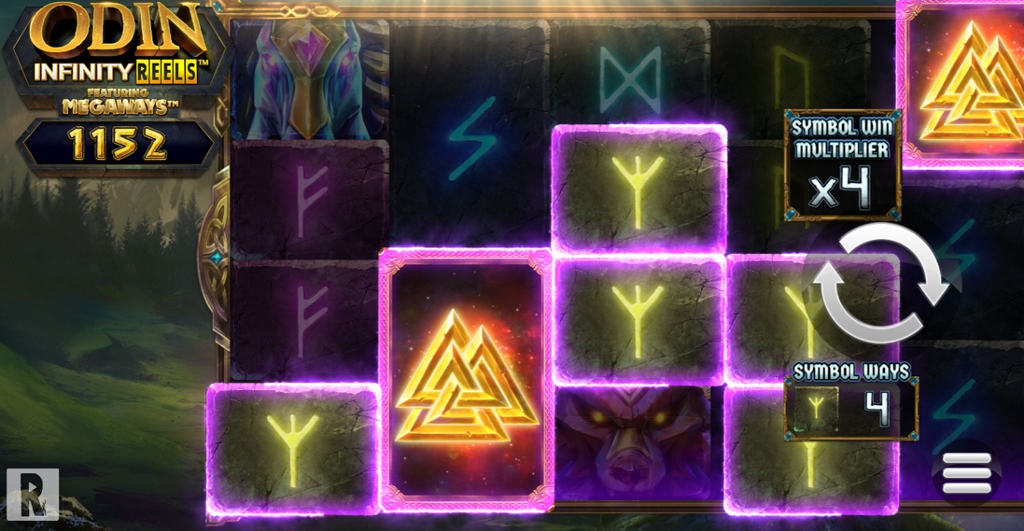 Simultaneously, a multiplier is activated the soon one reel is added. It starts at x1 and increases by x1 for each further reel, again, ad infinitum in synch with the number of added reels. There is no limit to the multiplier or the number of reels and Megaways. It will all come to an abrupt end when no new symbols or scatters land on the added reel that further improves the winning combo and the format is reset to the default 3×3. In the base game, the multiplier is also set back to x1.

Once a spin sequence ends, wins are calculated by multiplying the total ways of winning symbols in view with the symbol value from the paytable and then multiplied again by the achieved round multiplier. As shown in the example above, we had a total of 4 ways yellow rune stones and wild symbols which yielded 4×0.033 = 0.133 credits before the round multiplier of x4 was applied, resulting in a win of 0.133×4 = 0.533 credits. The game window resets to the default 3×3 format before the next spin sequence.

There is one more twist that will have a significant impact on your potential winnings and is sure to be the reason for some nailbiting moments. Adding 12 or more reels within one spin sequence will award a jackpot pay of 888x your bet. However, it will not be multiplied by the round multiplier. Hitting five or more Gungnir scatters within a single spin sequence will trigger the Free Spins feature. The game leads to a second screen where you will be presented with two wheels. The first shows the multiplier increments that will be active for the round. Options are x1, x2, x3 or x4. The second wheel contains 12 wedges with 4x 8 free spins, 6×10 free spins and 2x 12 free spins. The segments depict the true odds of winning any of the values. Each wheel will spin once to determine the multiplier increment and the number of free spins for your feature. Once the round starts, the win multiplier from the triggering spin will be transferred to become your starting multiplier and will never reset until the end of the feature. Instead, it will increase by the won multiplier increment for each added reel in a free spin sequence, ad infinitum. Landing minimum five Gungnir scatters will retrigger +4 free spins, again, no limits. The feature will end when you run out of free spins or reach the win cap of 20,000x bet.

One could call it the perfect marriage between the two reel mechanics. Or, as we witnessed earlier this year, David poked the Goliaths of the industry again by daring to be the first to combine them in a single slot.